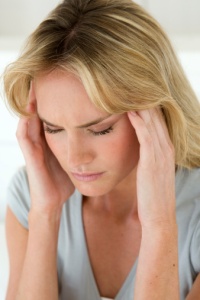 In December of 2005, a client came to me presenting symptoms of severe migraine headaches.

During a history intake she informed me that since her baby had been born, three months earlier, she had been getting 17 migraines a week. When asked when she first remembered getting the first migraine in this life, she recounted it happening at the onset of her first menstruation. However, she would only get them once a month and only one day of her period.

The client told me she had been to many doctors, especially neurologist, to seek their help. They found nothing organically wrong with her and only offered painkillers. She felt that they didn’t help and that she could not function with her new baby in this pain. When a headache would come on she would have to go to bed, with blinds shut and the room darkened. Often she would vomit due to the pain. She said these made her feel “trapped.”

I received additional history about her family, her husband and the childbirth, none of which sounded suspicious regarding the headaches.

We agreed that I would put her under hypnosis and ask that she go to the root of the migraines, to see what was causing them.

When under hypnosis, my client went into a past lifetime around the early 1800s. She saw herself living in a small house in the country, on a farm. When asked to look back over the first 10 years of her life to see if anything significant happened, she contracted, and started to cry. She said her father had raped her after her mother past away. She became pregnant, feeling “trapped” and ashamed. She stayed at home most of the time doing chores and disassociating to cope. Through breath work and visualization I had her release the feeling of being “trapped” and the deep shame she carried. She was 13 years old when this happened.

As I progressed her further to 15-years-old, she saw herself walking in town with her baby. Feeling out of her body, she got hit by a horse and wagon, hitting her head on the street and dying.  Death came so fast she had no time to think of anything before she died.

I took her to find a guide in the spiritual dimension so we could ask some questions. When she found her guide we asked how that life affected her migraines in this life.

We were told that the rape, pregnancy, and death were all tied together. The head trauma at death resulted as she carried the trauma of conception. This explained why she presented with headaches both at menstruation and after childbirth. The body‘s cellular memory was triggered by her connection to age and the conception of her baby. Conception and head trauma once again revisited.

My client called several months after our session to inform me that her migraines had disappeared but that she occasionally still gets headaches. When we asked her guide how many lifetimes does she need to release from to clear the headaches, we were told 3 more.

My client can now function as a mother and wife, without feeling ‘trapped”, or in severe pain. She will be coming to me to do the other 3 lifetimes so we can clear all of her headaches. Her doctors are amazed that she no longer suffers from her migraines.